Just a short 8.5 miles from the quaint town of Ely, Minnesota on scenic highway #1 lies River Point Resort & Outfitting Co., a secluded “sojourn at the lake”.  A private, wooded drive on River Point Road, brings you to your destination. River Point, with its own mile of shoreline on Birch Lake and the South Kawishiwi River is situated directly adjacent to the famous Boundary Waters Canoe Area Wilderness, on the northern and most private end of Birch Lake. Uncover the wilderness beauty of Birch Lake and the South Kawisiwi River. Tumbling south out of the BWCA, the iconic and serene South Kawishiwi River, comprised of majestic cliffs and tall white pine trees, is home to abundant wildlife, eagles, loons, and many other species of birds and waterfowl.

The secluded peninsula of River Point Resort & Outfitting Co. is Naturally Superior™ with lodging accommodations and service facilities sprinkled along the shoreline.

And the site of River Point Resort® is steeped in family history and a tradition of fine Minnesota resorting. Welcome! 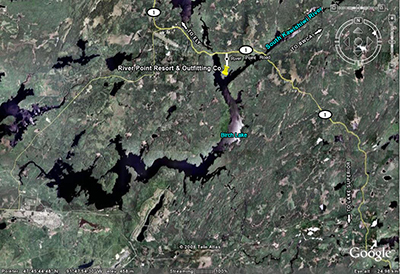 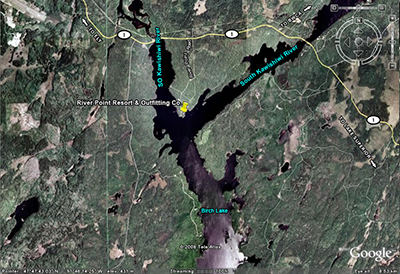 There are plenty of bays, coves, islands and rocky points on Birch Lake and the South Kawishiwi River to provide you with a lifetime of angling memories. Birch Lake is the largest Ely-area lake outside of the protected Boundary Waters lakes. Birch is 20 miles long and about 7,628 acres in size  with 90% of its wilderness shoreline being undeveloped federal land. This kind of wilderness seclusion and lack of shoreline development does not exist on any other lake in the Ely area.

Long and narrow, Birch Lake is like a serpentine river-lake, and at all times you can see from one shoreline to the other-easy to navigate with confidence. When the winds kick up a bit, no need to head for shore like you might have to do when fishing on a “round-type” lake-just slide into a cove or inlet and keep on fishing. The water in this picturesque lake is so dark it looks like root beer.

The irregularly shaped flowage of Birch Lake is managed for walleyes and northern pike by the DNR, and fishing can be excellent for both species. Typical size of walleyes is a 1-2-pound eaters and fish up to 10 pounds are pulled out fairly regularly. There’s lots of gravel and rock, and rock piles and points are the best places to fish for walleye.

“Look at northern Minnesota, and you’ll find Birch Lake. It’s not small-some 7,000 acres-but it has a bunch of 1- to 2- pounds, roughly three times the state average, according to DNR tests. Maximum depth is about 25 feet. A lesser-known honey hole that is brimming with walleyes just waiting to be caught someday.” Birch produces trophy walleye averaging 9.27 pounds, according to on the latest DNR data reports.

Birch Lake posts high numbers of golden walleyes. Birch has produced good sized “eating fish” consistently. Anglers should find good numbers of walleyes in the 13 to 20 inch range. They will likely catch smaller walleyes from year classes not yet assessed. Anglers should also have the opportunity to catch walleyes from the other year classes. Some of those should be some pretty decent sized fish, reports the DNR. Walleyes are prevalent in all class sizes with the 1.5 to 2 pound range being very abundant.

In the east end of Birch Lake by River Point try the rocks along both shores and by the Birch Lake Dam. Try a minnow or leech on a Lindy rig, slip bobber, or jig. In the western half of the lake, the shallow rocks and islands south of Birch River Narrows are good for early season action. You’ll also want to try the rocks and reefs farther east. There are also some nice perch in Birch and a jumbo up to a foot long is possible for some very satisfying meals.”

Here’s some of what Outdoor News has to say:

“Birch is full of walleyes that have continued to build in numbers through natural reproductions. The lake hasn’t been stocked with walleyes since 2002, but it doesn’t need to be, according to Jef Eibler, DNR assistant fisheries supervisor in Tower. Eibler says the most recent assessment of Birch lake, conducted in 2015, produced more than 13 walleyes per net, which was up from the previous survey in 2012. The lake has a reputation for producing eating-size walleyes, as well as trophy-caliber fish.”

Northern pike fishing can be tremendous. There has been a 24-36-inch protected slot limit on northern pike since 2003.

Both Steve Koschak (co-owner of River Point) and Eibler noted that this regulation has really increased the number of big pike in the system. Prior to the regulation, only 29 percent of the pike sampled were over 24 inches. That jumped to 52 percent in the 2015 survey, and 34 percent of them were over 36 inches, compared with just 9 percent prior to the protected slot.

“People were OK releasing those fish because they saw the quality going up, ” Koschak said. “We still have good numbers of pike to eat, but now we see fish in the 15-20-pound class every year.”

Early season, fish the bays with spinnerbaits, jerkbaits, or minnows. During summer, fish deeper points and drop-offs with a large jig tipped with a minnow or soft plastic.

Smallmouth Bass are found in the amazing flowage especially by the South Kawishiwi River bridge and the Birch Lake Dam, plus the waters right around River Point hold a lot of smallmouth bass. The smallmouth bass is one of the hardest fighting fish in North America, and Birch Lake in Minnesota has a bunch of them. Smallmouth bass are often found along relatively shallow rocky shoals, reefs and drop-offs, exactly what Birch Lake has. Birch is a relatively shallow lake at just 25 feet average depth but there are “deep holes”, as well. They can also be found in deeper water, where they are likely in search of prey fish or crayfish.

In rivers, such as the South Kawishiwi River, smallmouth bass are often found in rocky riffles, eddies and pools.  These feisty fish really can offer up a good fight and make the catch all the better. Many guests do practice “catch and release” and River Point does encourage it.

Crappie fishing with catches up to 13″ is huge for a northern Minnesota lake and makes for a very tasty meal. The black crappie is generally darker overall and has seven or eight spines in its dorsal fin and prefers deeper, cooler water. Young crappie eat small aquatic invertebrates. Adults can continue to feed on plankton but usually eat a lot of small fish as well. Using live bait such as leeches or minnows is a good idea when angling for crappie on Birch Lake. Crappies travel open water in schools, feeding generally at night, dawn and in the hours prior to dusk. Finding a school of these beauties can provide literally hours of fishing fun and they are delicious.

This river pathway is part of the Rainy River Watershed flowing southward out of the 1.1 million acre Boundary Waters Canoe Area Wilderness towards River Point bringing a surge of fresh spring water into Birch Lake each and then its gently flowing current continues to flow throughout the season providing life-giving oxygen to plants and all species of fish. The South Kawishiwi River then joins Birch Lake at the southern most tip of River Point’s private peninsula and together these waters wrap around the west shoreline of River Point and continue their path back into the BWCA and onward to Hudson Bay, Canada. Renown for its prime fishery, the South Kawishiw River is another reason to select River Point Resort & Outfitting Co. as your vacation destination.

If you are not a fisherperson, know that this amazing waterway is a boater’s paradise. So much undeveloped shoreline to explore, to build a bonfire for roasting marshmallows and hot dogs on a stick, to swim, to berry pick, and so much more. The peacefulness, the lack dozens of other boaters, and simply that feeling of freedom “from all things constraining” is exhilarating!