River Point Resort was honored to be awarded the Minnesota Association of Innkeepers‘ “Resort Property of the Year Award” for 2003, in the award category of 1 to 35 rooms.

“There have been three generations of Koschaks running River Point Resort outside Ely on the South Kawishiwi River. And it may be that flow of generations and attention to detail from a family-owned business that has led the resort to its latest award.

“The facility has 10 cabins, three villas, four chalets and bunkhouse facilities, and serves both resort customers and those entering the BWCAW wilderness. Koschak attributes the family’s success to a great location, with several BWCAW entry points nearby, hard work and attention to service.

“We’ve been doing this for a lifetime,” Steve Koschak said. Today, Steve and Jane’s sons, Kevin and James, help run the business as well. “We’re excited about the award,” Koschak said. “It’s an award from your peers.”

“Tim McKim, president of the MAI board, said River Point’s selection was nearly unanimous among board members. He said the board looks at cleanliness of the facility and its operation in making its decision, but also give a lot of weight to the owners’ involvement in the tourism industry. The Koschaks have worked hard to promote tourism, he said.” 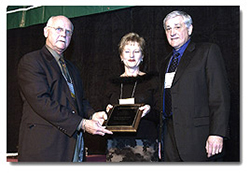